Who is Shark Phu?

Shark Phu is more popular when participating in Shark Tank Vietnam season 1 and season 2. By season 3 in 2019, he is no longer participating.

What is Shark Phu’s real name?

When was Shark Phu born?

Where is Shark Phu from?

He was born in Ha Dong town, in the former Ha Tay province.

He graduated with a Bachelor’s degree in Labor Economics from the National Economics University, Hanoi.

Shark Phu was born in a family with a tradition of studiousness. His father is from Nghe An. When he was young, his parents planted a lot of flowers and did many side jobs to support their children’s education.

Like many families at the same time, shark Phu’s economic conditions were very difficult. Since childhood, he and his family did a lot of extra jobs from breeding, making tofu, going to school and working part-time to cover life and study. 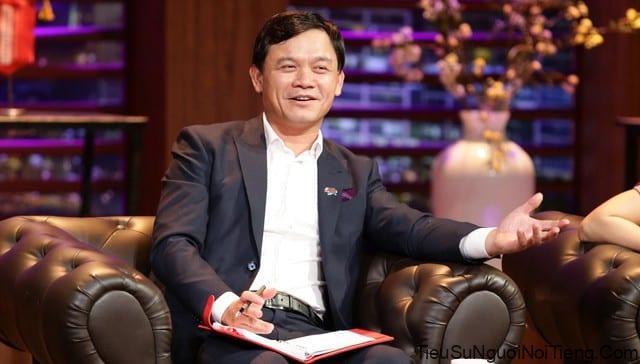 Shark Phu is good at natural subjects, and once dreamed of becoming a famous mathematician or scientist. Up to grade 3, the question mark about poverty led Shark Phu to change direction to want to take an economic exam. Later, he entered the National Economics School.

His mother was originally from Ha Dong, and his father was from Nghe An. “In Nghe An people always carry in their mind the desire for their children to study and have a very strong will”, Shark Phu shared about his father. According to him, that is the reason why although his family circumstances are very difficult and he was born in a place where there are not many conditions to study, his parents are very concerned about their children’s education. Shark Phu’s parents even hired private tutors and tutors during the period when Shark Phu was preparing for the university entrance exam.

“That is also the reason why I have made fundamental changes and turning points in my later life”, grateful Shark Phu. He shared that his whole village that day was the only one who had graduated from university, and there were only a few people in his high school. 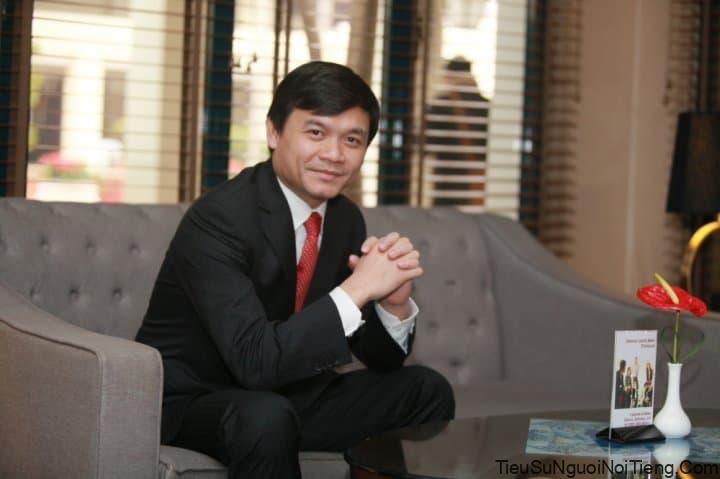 “Going to university is a great honor. Studying for the university entrance exam, almost my parents gave me all the conditions and time to study. While I was studying, I saw my parents working very hard, for example, my mother got up at 4 am to do a side job. Or like my father coming home from work and still gardening alone, not allowing me to participate but asking me to study. Those are the things that bother me a lot.” The young man focused on his studies and passed the exam with very high scores.

However, after entering university, Shark Phu said that what he learned and read did not satisfy his concerns and questions at that time.

After entering university for 1 year, Shark Phu changed a lot. The big turning point came when his mother stopped working as a sidekick and bought a stall at Nga Tu So market. This is Shark Phu’s first step into the path of starting a business. At this time, a brother abroad sent a box of all kinds of things from the Soviet Union and Shark Phu was responsible for selling this box to his mother. Since then, Shark Phu knew where to buy and sell and then gradually expanded to sell to people around who had available goods.

“This is a very important experience and can be said to have a huge impact on me in my later career. I feel really lucky to be exposed to the business environment from an early age”, Shark Phu is proud of his first business. 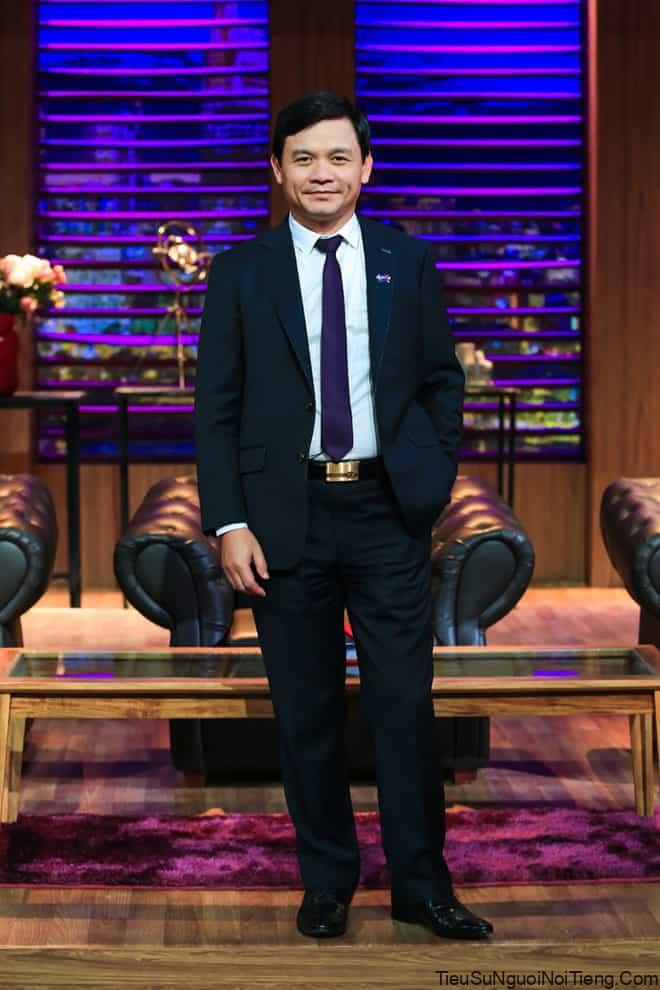 After graduating, Shark Phu was recruited to work for Petrol Corporation. According to this businessman, the corporation chose 5 people who graduated from the National Economics School and did not understand why they were chosen.

“At that time, joining the company was the dream of many students. However, when I entered, I felt that the work was very light, not using all my time. That’s why I also had a feeling of not satisfying my expectations when I entered the economic sector,” recalled Shark Phu. After 9 months of working, when he was signed to the state payroll for about a month and a half, Shark Phu decision to leave.

That year, there was only one joint venture enterprise, VMET with 100% Taiwanese capital, specializing in the production of motorbikes, and Shark Phu was recruited after submitting the application. “This job lifted me to new heights,” recalls Shark Phu. He and his colleagues had to worry about finding sources of goods, signing contracts, finding carriers, and importing and exporting procedures. This helps him to have relationships with authorities, customs, and the Ministry of Industry and Trade.

“Foreigners are very fastidious,” said Shark Phu. For example, a shipment sent to an aircraft must be met on time, otherwise it will affect the whole transfer line. While at this stage, the procedures are still cumbersome, so it requires the person performing the relationship as well as understanding the procedures and the application process in the best way. 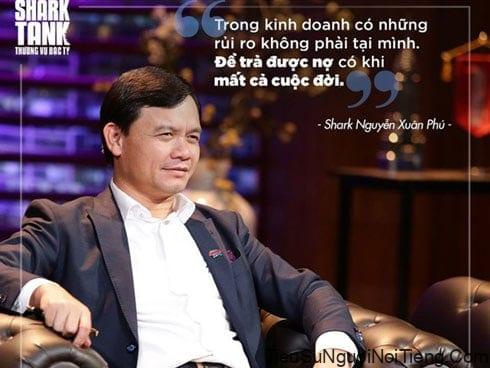 “My boss, I feel the same way. After 1-2 years I found I was able to catch up. At that time, the general manager of Taiwan visited and met with VMET employees, they paid very low wages, while Taiwanese people were paid very high $4,000-5,000 while we were only $150,” recalled Shark Phu. time spent working for VMET. Shark Phu questioned and asked for a salary increase or he would quit his job. At the same time he also wants to find a job in a really big global company around the globe. At that time, Ford started recruiting and Shark Phu decided to apply.

The management style of American companies according to Shark Phu is different from Asian companies: Management is based on goals. “They give themselves the right to be really proactive in the goals they set,” the businessman commented.

This helps Shark Phu a lot. He was assigned to build the supplies room for Ford, along with a retired Australian consultant and a $1 million budget. Everything has to be done by yourself. “Weekly they always hold meetings and ask questions like does the supplies department need a forklift, need a warehouse? They let us visit 3 factories around the world to learn, visit to build for Ford Vietnam”, recalls Shark Phu.

Contrary to the way Taiwanese management follows the process, the American way of management is that they just stand behind, adjust and comment. And according to this businessman, his time at Ford has helped foster confidence, dare to make decisions with him. 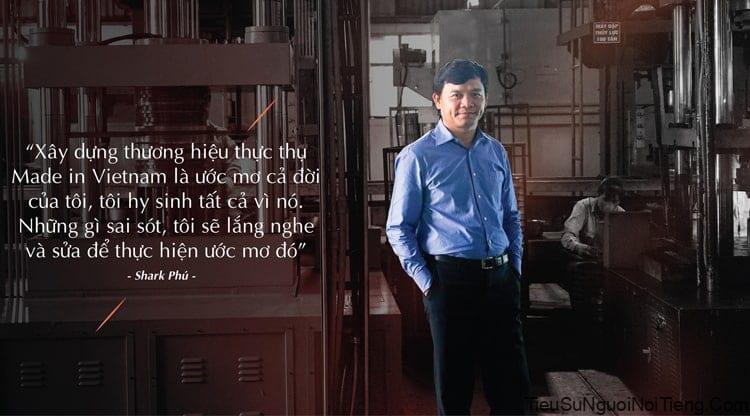 Working for 10 years after graduation, especially at two foreign companies, has created more positive and optimistic thoughts about the capabilities of Vietnamese people. He wondered why almost all domestic products are now imported from abroad? What can we produce in Vietnam? Why not?

Starting from those stages, Nguyen Xuan Phu with a meager accumulated capital of 30 million (actually, only 20 million, because he lent his friend 10 million to build a house) he started a business. started its own business in 2003 operating in the field of manufacturing basic housewares such as Pots, Pots, Pans, …. Struggling with building and creating the first products to market, however, between production and sales are two completely unfamiliar boundaries.

With the first shipment he failed when he encountered the first competitor but was a strong competitor, the market was already there, they sold at a price lower than the production cost of Mr. Nguyen Xuan Phu. Struggling in this failure, most of the company’s shareholders withdrew, leaving only him to face difficulties and if he had given up then, Vietnamese people are not known as much about the SUNHOUSE brand today. so.

Facing difficulties, he had to sell at a price lower than the production cost to last a while before he found a contract to distribute the Korean brand of gas stoves. Through the redistribution of gas stoves, reselling the stoves at a lower price than the import price to attract the market and at the same time inserting the marketing with products manufactured by his company at very low prices. This can be said to be his last risky step, but it brings great results in the development of his product’s brand, when consumers are familiar with and accept his products, his reputation is recognized. spread, the brand value increased in the market brought great results for CEO Nguyen Xuan Phu.

Products manufactured by his company have captured a large market share in the country, but the story of making this billionaire’s name does not stop there. In a meeting and proposed cooperation with Sunhouse Corporation Korea, he was approved by the Korean boss and agreed to transfer technology and business privileges of this group in Vietnam. 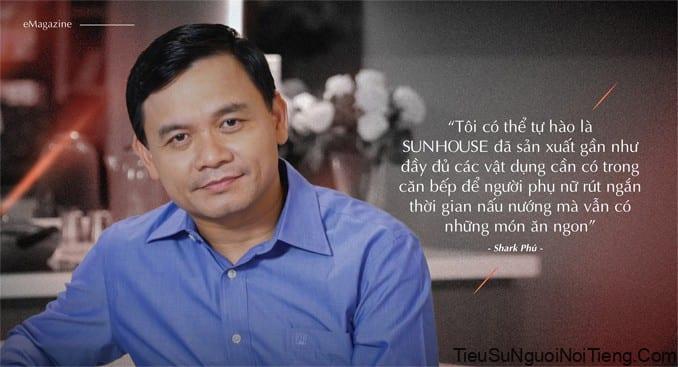 SUNHOUSE Vietnam was born with the strength as the foundation along with the business experience for many years of the owner Nguyen Xuan Phu, the name of SUNHOUSE quickly appeared throughout the country from urban to rural areas. Rightly hitting the weak market of the Vietnamese market “a product must be multi-functional”, he continuously improved his products according to the Vietnamese market and brought a great leap in revenue.

Up to now, SUNHOUSE is not only the leading brand of the Vietnamese home appliance industry but also is reaching out strongly to the international market, affirming its name in many fastidious markets around the world. With a network of 50,000 points of sale, production and business of more than 450 groups of essential household products, SUNHOUSE products have been present in the entire system of supermarkets, commercial centers, traditional stores … in 63 provinces and cities. of the whole country, initially reaching out to foreign markets such as Canada, Mexico, Cambodia, Laos, Myanmar, Egypt, Turkey and even fastidious markets such as Hong Kong, Brazil, and other countries. Other Europe.

SUNHOUSE Group is aiming to become a corporation over 5,000 billion by 2020, expanding the market to serve 350 million people and asserting its name on the world map of household appliances with export revenue reaching 10 million USD.

The good sayings of shark Phu

“Two tigers cannot be kept in the same cage. Two queen bees in the same hive sooner or later have to separate… If you want to go together, find someone shorter than you, make up for it, you can go for a long time, and you have to suffer, even if the other person doesn’t do anything for you. have to bear and still have to share the money with them”.

“90% of startups will die in the middle of the road, it’s true. However, the remaining 10% to succeed, often those people must be persistent, persistent, have a comprehensive view. They must be very thrifty, know how to calculate, how to survive enough to a breakeven threshold, when their products or services are accepted by the market, then there will be cash flow back and new startups. can exist”.

If you want all your ideas to come true, be ready to suffer, criticize and then work to prove it.” 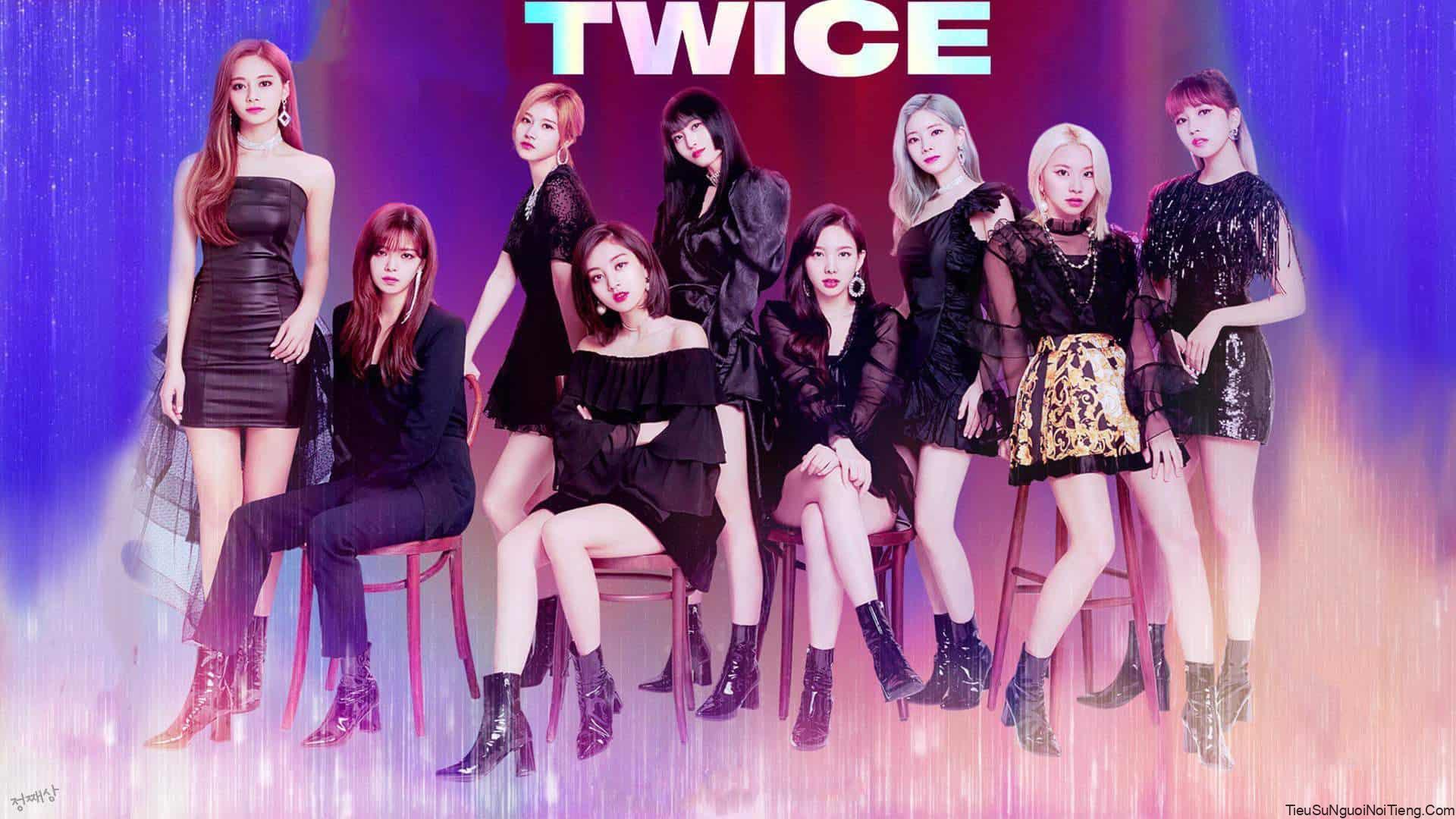 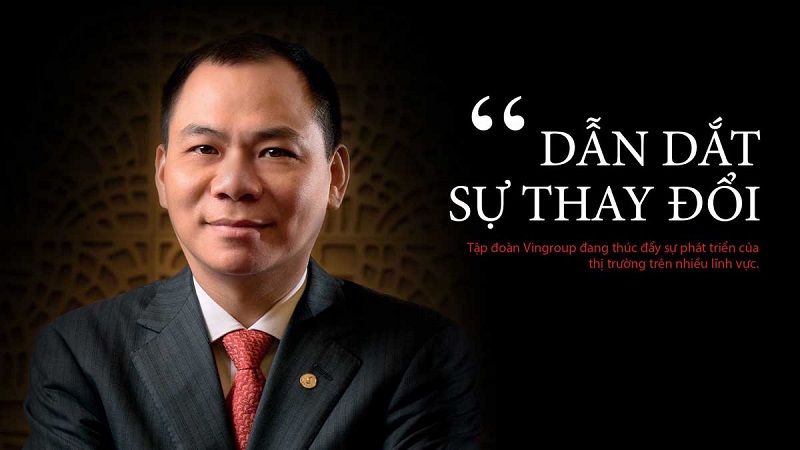 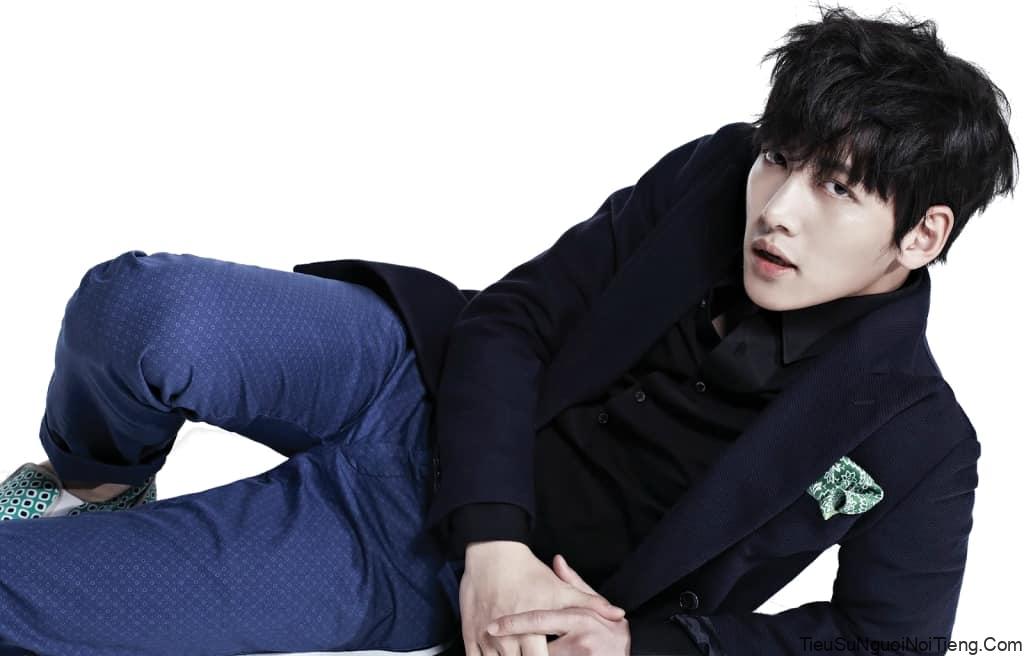